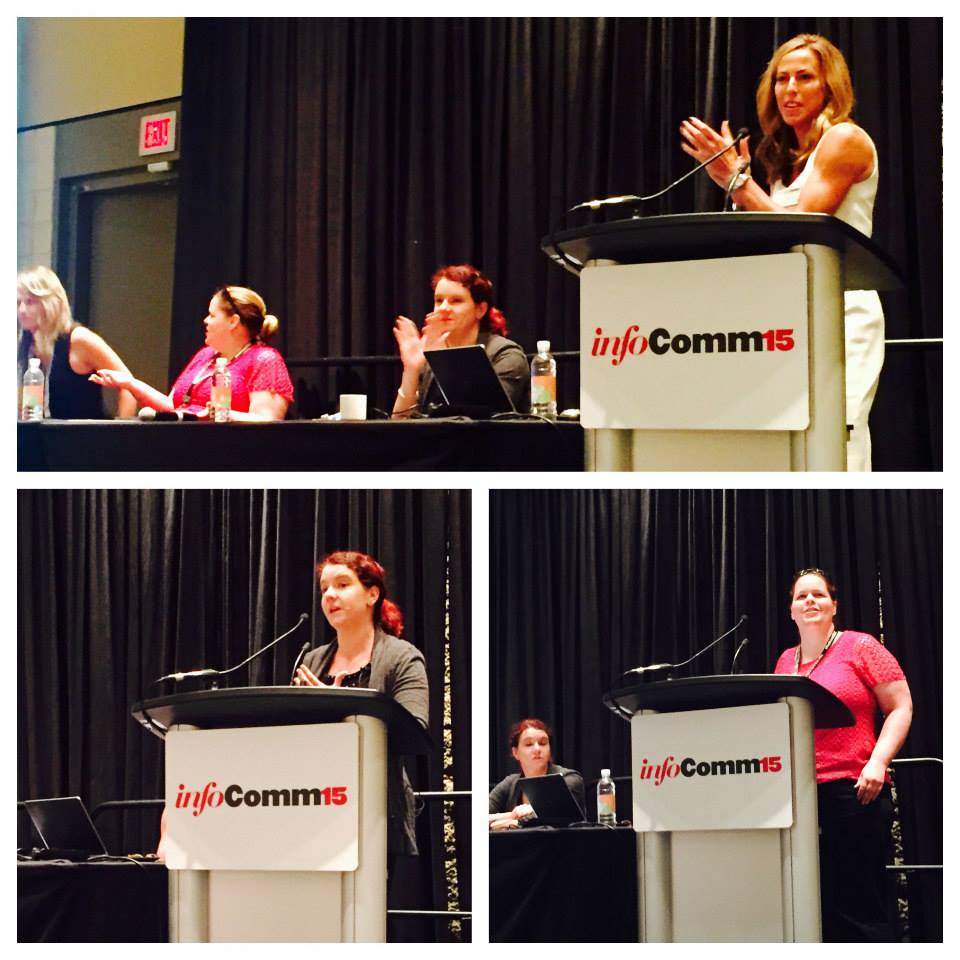 Posted in Women in Tech

Lean In, Step Up, Take Your Lane

InfoComm International recently formed an organization to promote and support women in the AV industry, the Women of Infocomm Network (WIN) Council. At InfoComm, we met for a breakfast, where I had the great honor of presenting the inaugural member showcase. I spoke about my career, the work that I’ve put into it, and encouraged all of the women in attendance to get certifications and move up in their own careers.

At the beginning of the breakfast, Sam Horn gave an inspirational talk about stepping up at work. Her words really resonated with me, and I’ve greatly enjoyed reading the copy of her book that we all received. You know it was a great speech, because I paid rapt attention even though I was totally nervous about getting up in front of everyone myself.

Sam exhorted everyone to step up instead of stepping back, and she gave us plenty of concrete examples. I liked that she had everybody write things down. It was a great reinforcement mechanism, as well as a good way to keep folks from fiddling with their digital devices. She talked a lot about what we were going to do to get our dream jobs. I felt unbelievably lucky when I realized, “Oh, wow, I am very likely starting my dream job next week.”

The theme for my talk was “take your lane.” What does that mean? It means that women are proportionally over-represented in fatal bike accidents. A cheery topic, yes?

(It has a tie-in to the technology industry, I swear!)

One of the prevailing theories about this sad phenomenon is that female bikers tend not to assert themselves the way that their male counterparts do. They think they’re doing the safe thing by going slower and staying at the edge of the road. But, what they’re really doing is boxing themselves in, and depriving themselves of precious maneuverability. When a road hazard comes up, they don’t have the space or the speed to get around it.

In other words, the “safe thing” to do is not always so safe. When it comes to your career, you have to take your lane.

There are many times in my career where I could have done the safe thing. There are many times in my career when I kinda sorta wished that maybe I’d just stuck with the safe thing. But I wouldn’t be where I am today if I’d done that. I wouldn’t be making the money that I make, doing the interesting work that I do, and I would definitely not be working from home. Instead, I’d probably still be walking across a college campus all day, helping faculty members plug their laptops in.

(There’s nothing wrong with helping faculty members with their laptops. It’s just not intellectually sustaining in the long-run.)

(Also, it’s very much something that you can’t do from home.)

Leaving a cushy job in academia is a scary prospect, but my career there had maxed out. If I wanted to get better, I had to move on. So, I leveraged my network to get a more challenging job with some real growth potential. To further that metaphor, I took my lane.

I won’t force you to relive the entirety of my career growth, but suffice it to say, I worked my ass off when I was younger. And I continue to work my ass off today. I’m constantly reading up on new technologies, taking any trainings that are offered to me, listening to industry podcasts, and pushing myself to try new programming methods. I even co-host a weekly podcast, where I’ve learned quite a bit from my co-hosts and our guests. And I never stop asking other people questions.

The best part of my talk was when it ended. Not because I was miserable up there (quite the opposite, it ended up being a lot of fun!), but because all of these amazing women came up to me to chat. There were the female leaders who really are Leaning In (Cheryl Sandberg has not been lying to us!). There were my amazing #AVfriends who were all so incredibly supportive. And, best of all, there were the young Hope Roths (so to speak) who wanted to let me know that they want more from their careers. They want to Lean In. They want to Step Up. They’re going to Take Their Lanes.

(Gratuitous capitalization, do you feel it?).

By the end of the breakfast, I was feeling pretty emotional. I can neither confirm nor deny that I got a bit teary about it all. It was all just so damn inspiring. To meet women who are literally captains of our industry. To meet the women who are someday going to be the captains of our industry. To hear someone say, “I wasn’t sure if I wanted to stay in this line of work. But after your talk, I’m going to get certifications and grow my career.” Because someone really did say that. And it was just the most incredible feeling.

The best part about it all? The WIN Council has built on the momentum with some really great (and concrete!) next steps. It’s all almost enough to make me all optimistic about the future of women in technology. 😀

← On Women in Technology [Repost]
The Video of my InfoComm Speech is Online! →

1 comment for “Lean In, Step Up, Take Your Lane”