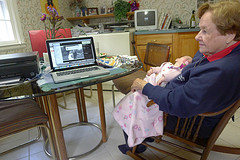 Posted in History, Women in Tech

My grandma. What can I say about her? She makes the world’s greatest pumpkin bread. She gave handmade quilts to all of her grandkids when they graduated from high school, college, and got married. She’s the first person who will bring you soup if you’re sick.

She was also a kick-ass computer programmer.

I’ve always known that she was a programmer. I mean, there aren’t many other computer science majors out there who can say that their grandma offered to help them with their COBOL homework.

(I told her we used Java, but that she could make a pile of cash working on legacy systems for the DoD and Boeing if she wanted to un-retire.)

These are some things you need to know about my grandma:

What I didn’t know, was how she became a programmer in the first place. So, when we visited her a couple of weeks ago, I sat down and asked her a bunch of questions. Her story was even cooler than I thought.

First: a little back story. Grandma was a home economics major at UConn. But she wasn’t baking cakes, or sewing draperies. Oh no, no. Grandma was learning about textile science. She took organic chemistry. And she aced it. She took math classes. For fun.

(I’m not sure if I should be cursing so much. Grandma would probably not approve.)

Grandma graduated with a shiny degree in textile science just in time for all of the good textile science jobs to move down south. She got an offer from Simplicity, but decided she didn’t want to move. Grandpa was kindof in the picture at this point. 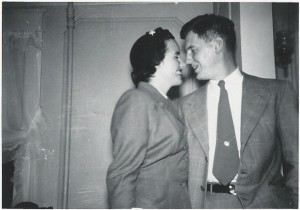 She didn’t really expect to have a career (most women didn’t at the time). Spoiler alert: that’s kindof the whole point of this whole post. So, she took a job in the actuarial department at Liberty Travel. And then she left the work force to raise this enormous baby, aka my Dad. 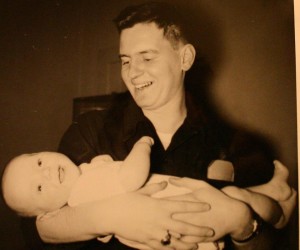 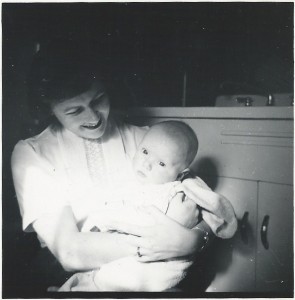 So how do you go from raising babies (she also had my Aunt Patti) to programming? Well, let me tell you.

The City of Hartford decided to make the switch to computerized personnel records. And by “computerized records,” I mean punch cards. They had all of school system employees fill out forms, but then they needed someone to code them all. That someone was my grandma. They had someone else do all of the programming, but then you know what they realized? Personnel records change. They kinda needed someone to program the changes. Which meant that they needed someone to code all of those changes. Grandma did the coding, and she ended up sitting with the programmer while he did his programming thing.

Long story short, Grandma spent a lot of time asking the programmer questions (“how does that work?” “what does that function do?”). That’s pretty much how I learned all about AV when I was younger, so it was pretty cool to realize that was something grandma and I have in common. Like me, grandma learned enough by asking questions that she was able to move into legit programming. They sent her to classes for it and everything.

Of course, it’s never that easy (is it ever?). Grandma was doing the work of a programmer, but they kept her on the payroll as an admin. Apparently, her job change never really made it into the city budget. And then, they got it into the budget, but they gave the job to someone else. Hooray for city politics.

Grandma totally #TookHerLane though! She refused to go full-time if they weren’t going to make her a full-fledged programmer. It was the only leverage she had. But it worked! They reorganized the department and gave her the job she was already doing. Grandma loved her work. She loved her work so much, she would bring her work home to debug it.

Eventually, the city upgraded to COBOL and grandma got a fancy new mainframe terminal on her desk. By this point, Grandma was a master of her craft. She knew the ins and the outs of the database, because she’d been there since its inception. Her department handled the records for all of the school system personnel, as well as warehouses, etc. They had 14 unions (and their contracts) to write algorithms for. Depending on the contract, her systems would need to handle all sorts of payroll updates. And we all know how little room for error there is when it comes to people’s paychecks.

Grandma ended up working as a programmer for 25 years. In all that time, she never had another woman (that she can remember) in a class with her. (Sadly, this hasn’t changed much in the last 25-30 years.) She hadn’t planned on having a career, but she ended up having a pretty damn good one.

I hope that you all enjoyed my grandmother’s story half as much I enjoyed talking to her about it!

← The Video of my InfoComm Speech is Online!
Gadget Review: The Garmin vívofit →