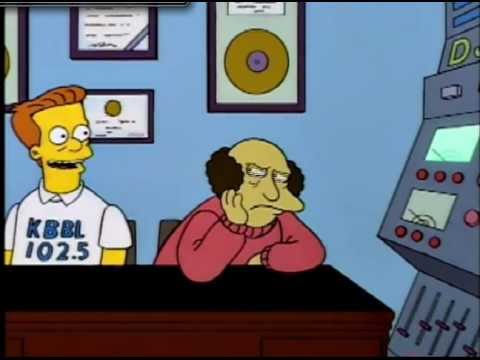 “Don’t Praise the Machine” (the Future of Integration)

One of my favorite episodes of the Simpsons involves Bart Simpson and an elephant named Stampy (who turns out to be a bit of a jerk). It also involves a couple of radio DJs are who are in danger of being replaced by a computer, the DJ 3000.

DJ 3000: Looks like those clowns in Congress did it again. What a bunch of clowns.

First DJ: How does it keep up with the news like that?

In my most terrifying of AV nightmares, I wake up to discover that I’ve been replaced with the Programmer 3000. Or some facsimile of one (software program, IT company, etc). I’m guessing I’m not the only person who has this nightmare. I mean, AV/IT convergence is such a hot topic these days, we’ve half jokingly banned the term from the AV Power Up! show.

In a slightly less pop-cultural nightmare, I’m one of the highly skilled textile weavers who comprised the luddite movement. The work that they did was difficult to do, and they were well-payed for it. They were in high demand… until they weren’t. The advent of the industrial revolution saw their jobs replaced by textile machines. They smashed a bunch of said machines, but their jobs never come back. Technological progress had rendered them obsolete.

The fictional DJs in my Simpsons episode were right to be scared. The radio DJ has gone the way of the dodo (or the skilled weaver). Most of us would be hard pressed to name a local radio personality. And many station have gone to an all-automated format entirely.

With the advent of Crestron’s Pyng and other “self-programming” systems, should professional integrators be scared?

Automated systems might have replaced the majority of America’s inane DJs, but they can’t replace the quality programming on serious talk radio (NPR tried to make an Ira Glass Bot, but it just kept saying “after the break!” and snapping people’s legs in half). It can’t even replace the less quality programming on semi-serious talk radio (I’m looking at you, people yelling at each other over my car stereo last night). Calling out the clowns in Washington is so easy, a computer could do it. Providing in-depth analysis and engaging content? The machines might get there someday, but for now I think most of us will stick with Terri Gross (I’m sure there are other great radio personalities out there, but I’m kindof an NPR fan-girl).

And that’s the trick, right? In order to stay relevant, we in the AV industry have to produce something of value. We can’t just sell boxes to our clients, we need to sell ourselves. Don’t just talk about the clowns in Washington. Give details, suggest solutions. Most of the dealers out there are doing top-notch work, and their clients appreciate the enhanced experience and stability of their systems. They know they might get cheaper TVs at Best Buy. But they also know that the end product will be better (and less stressful) if they get someone who really knows what they’re doing to install it for them.

AV people are some of the most helpful people that I know. In my own work experience, I’ve seen AV groups merge with IT departments… and watched the AV folks take on more IT responsibilities. Maybe I’m just lucky, but all of the AV people that I know will do whatever it takes to get a system up and running again. If that means re-imaging a PC, or updating a server or two? So be it. Let’s make the end user happy. They don’t care if it’s in their job description.

In an ideal world, smaller systems will be deployed using a configurator… our end users will be happy… they’ll buy more stuff… the industry will grow… and there will be plenty of big jobs so that the rest of us can spend our time focusing on the whiz-bang stuff.

In a less ideal world? We all get automated out of jobs. But I don’t think that’s endemic to just our industry. The world is getting more automated in general. Taxi drivers should probably be less worried about Uber and more concerned about driverless cars. Technology is changing. It’s providing many of us with amazing new opportunities. My sincerest of hopes is that it’s a rising tide that lifts all of our boats. My most cynical of doubts is that some of us will be left behind. Those of us who stay on top of our games, who learn, who adapt? I’m guessing that we’ll have the best shot at working for our new robot overlords.

The radio industry might have automated itself down to the lowest common denominator, but the podcast industry is thriving. Technology might change some job titles, but it doesn’t always change core job responsibilities. Provide something of value, and people will consume it. Talk about the clowns in Washington, and people will probably just roll their eyes.

(Making a podcast profitable is a whole other ballgame, but I sure do like living in a world where I can download the WTF podcast and not worry about FCC violations).

And, if it turns out that we’re all more like those skilled weavers who lost their jobs to textile machines? I don’t have a good answer for that one. I guess I’ll just have to go with my fallback plan of becoming a standup paddleboarding yoga instructor. But, I don’t think it will come down to that. As long as there is technology, there will be people who need help with it. Which means plenty of jobs in the technology industry for all of us.

← How Bill Belichick Taught Me to be a Better Programmer
Where Have All the AV Programmers Gone? →